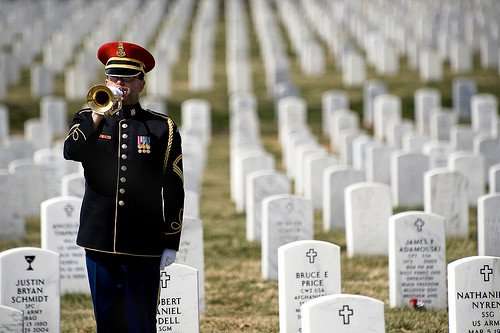 The forlorn trumpet or bugle being played during a military funeral that seems to hold that note longer than possible. It never seems to end, it just fades away. The echo seems to reverberate and you are never sure until later that it is gone. Somber. Final. The traditions of taps goes back as far as the 17th century.
Taps is actually considered a signal and not a song. Over the years some have added words as a mnemonic device but taps have no lyrics. Taps is played by a single bugle or trumpet and the typical duration is 59 seconds. It is played at dusk, sunset, flag ceremonies, sometimes played at boy scout and girl scout meetings but it is probably best known for being played at military funerals.
Taps comes from the Dutch taptoe, meaning “close the (beer) taps (and send the troops back to camp)” dating back to the 1600’s. Essentially, taps would be played to signal the local taverns to stop serving, turn off the taps, so the soldiers would return to camp. An alternative explanation is that it comes from a term used before the Civil War. Three single drum taps which meant extinguish lights or “lights out”.
There are several legends concerning taps but the most widely accepted version is that the tune is a variation of an earlier bugle call and was arranged by Union Army Brigadier General Daniel Butterfield, an American Civil War general and a Medal of Honor winner. General Butterfield used the new arrangement to replace a French bugle call for “lights out’. His bugler, Oliver Wilcoy Norton, was the first to sound the new call. Within a few months both the Union and the Confederate armies adopted the signal for the same reasons. To this day taps is sometimes still referred to as Butterfield’s lullaby. The US Army officially recognized it in 1874.
Captain John Tidball, West Point Class of 1848, is thought to be the one who started the custom of playing taps at military funerals. A corporal in Tidball’s artillery battery died in July of 1862. He would later describe the corporal as, “a most excellent man”, and wanted to bury him with full military honors. Usually, three guns would be fired over the grave but Tidball was not allowed due to military reasons. He decided to sound taps instead. It was repeated by others and in a short time it was taken up by the entire army. It is now considered the most poignant part of a military funeral. It became a standard part of all military funerals in 1891.
The traditions of taps goes back centuries but has only been associated with the US military since the Civil War. Virtually everyone in the United States knows the tune means the end of a veterans funeral service. Most people feel it is a sad ending but it really should be seen as the end of a life well lived.