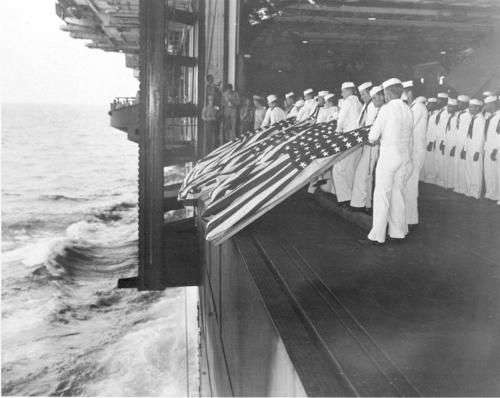 One of the more unique forms of military funerals has to be the age old tradition of burial at sea. The tradition of burial at sea has been conducted for as long as there have been seafaring peoples. A tradition born of necessity. When traveling so very far away with limited space it is only natural that commiting the remains of a fellow crew member to the ocean depths would be necessary. It doesn’t take much imagination to picture an ancient ship, with very little space, having to deal with the death of a crew mate, more likely due to sickness, and taking measures to protect the rest of the crew by disposing the remains at sea. Thousands of years later that same tradition is still carried out by modern navies.

The US Navy conducts burials at sea for intact remains as well as cremated remains. It is only done while the vessel is deployed so family members would not be allowed to attend.The commanding officer notifies the family after deployment of date, time, latitude and longitude of the location. Individuals eligible for this program are: (1) active duty members of the uniformed services; (2) retirees and veterans who were honorably discharged. (3) U.S. civilian marine personnel of the Military Sealift Command; and (4) dependent family members of active duty personnel, retirees, and veterans of the uniformed services. After the death of the individual for whom the request for Burial at Sea is being made, the Person Authorized to Direct Disposition (PADD) should contact the Navy and Marine Corps Mortuary Affairs office at 1-866-787-0081 to request a packet and for additional information.

Supporting documents which must accompany this request are:

(1) a photocopy of the death certificate

(2) the burial transit permit or the cremation certificate

(3) a copy of the DD Form 214, discharge certificate, or retirement order.

The ceremony has religious and military components. Burials at sea are conducted on a regular basis but there is no way to know how many or how often. The Navy does not disclose that information in keeping with its standards of privacy. There have been many burials at sea due to wartime actions as recently as World War II due to long periods of time at sea or the threat of attack. Today, many service members, veterans, and their family members choose to be buried at sea. There are several private companies that will arrange the ceremony for civilians. The long-standing tradition will continue to be conducted to honor those who served, and their family members, in the US Navy.